In ancient times, the art of Karate on Okinawa could not be practiced openly and lacked formal names, people simply referred to the various schools of Karate that developed by the names of the areas from which they originated. The three Meccas, or most famous centers, for Karate on Okinawa were Shuri, Naha and Tomari.

One of the most famous Grand Masters in Shuri was Master Itosu. In Naha, it was Master Higaonna. These two men were the highest Karate authorities of their time in the late 1800s to early 1900s. There were however, significant differences between them.

The style of Mr. Itosu’s shuri-te karate was that used by the Shuri Castle guards and envisioned the idealized confrontation between a weaponless defender against a long-bladed, weapon-carrying opponent (or disadvantaged defender against advantaged attacker) and so emphasized a speedy and linearly expansive entry from a distance followed by a whip-like, percussive strike to quickly end an attack. 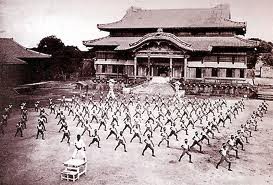 Whereas the style of Mr. Higaonna’s naha-te karate placed more emphasis on conditioning the body for both attack and defense (while no amount of conditioning protects the body against the sharpened blade envisioned in the shuri-te style) which is a common characteristic of southern Shaolin “street” styles. There is a strong internal component to the practice, including focused breathing and tensioning exercises similar to Chinese Qigong. Naha-te emphasizes circular hand motions, low kicks and infighting (coordinating footwork with short, rapid hand traps and attacks and with grabs, locks, throws, and sweeps).

The foregoing explanation presents a broad and purposefully dualistic view of these two core styles of karate. Technically speaking, the two styles represent different approaches to expressing power through different techniques, body structures, mechanics, movements and even breathing methods. Regardless of the activity, whether it’s walking, running, jumping, climbing, throwing a ball, punching or whatever — understanding and the ability to apply sound breathing, mechanics and movement is the key to performance. The art that draws upon such a rich technical pallet as these two martial methods leaves for the practitioner a lifetime worth of serious study to truly gain mastery of its application and appreciate its depth.